Festival of Go started in Ruyan the first round: Alsu vs Georgiy

A Festival of Go opens today on the bank of the Ob River. This festival will take place in Ruyan, a city projected by “Expedition” company. It will extend for four days. There are a lot of events planned in the festival programme, the main of which is a Tournament of Cities. Five ladies and five men have been selected by the Organizing Committee to participate in the festival. These participants are from different cities – Kazan, Moscow, Novosibirsk, Voronezh, Rostov, and even from Sevastopol. 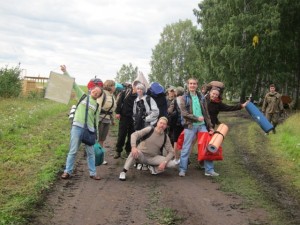 The idea of Tournament belongs to Igor Grishin, a president of Go Federation in Russia. Hopefully this tournament will become regular and new cities will join it. camp of the festival and tournament place

The festival of Go is a part of a big Ruyan festival organized by “Expedition”. So more than 300 people will come together on the bank of the Siberian river. The Go-program will not be limited by a tournament, but also will contain a master-class on Strategic Go given by Igor Grishin. Also the participants of the tournament will train everybody who is interested in game of Go. lesson for guests of the festival

We express gratitude to the members of “Expedition” company for their help in organizing of Festival of Go in Ruyan. 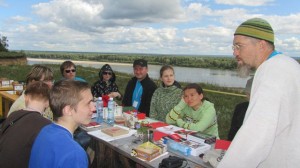 Hello, I am Dima. This is my story about the 33rd Quebec Open which hold in Montreal in 4-5 of June 2011. I participated in that tournament and as a result I won 4 of the 6 my games. I really enjoyed playing and talking this all interesting people who also came there. I hope I’ll have a chance to come there again…
Thanks to all audience for watching and listening.

Go and Strategy Department in Moscow

The 9-th of May 2011 Go and Strategy dep. was opened in Moscow University of Industry and Finance (MFPA). It is the first official department about Go in russian education system. on presentation of Go and Strategy dep.

Go Game as a medium of self-development

“Go is a powerful mind catalyst not only for knowledge workers but for any person interested in self development” — a conceptual standpoint on Go by Dennis Olevanov, a business consultant of international IT company and a student of the Russian School of Go and Strategy.

“Snob is an international project and a one-of-kind social medium for people, who live in various countries around the world, speak various languages but think in Russian.” — states the website of this project. More than 100 people accepted invitations to our presentation. The major part of the participants were the members of Snob Club and guests of Mildberry Branding Agency where our workshop took place. Nobody knew about Go before. As a result more than 50 people took part in this event.

Igor Grishin found an original conception for this workshop. Each participant chose one of the three roles: a pupil (only 5 people), a listener or a viewer. Participants who chose to be listeners could stay away from the game but were able to ask questions during the workshop. Viewers could just watch how Igor Grishin explained the rules of Go and how pupils were learning them and trying to play.

Pupils study the rules of the game

9×9 Go boards from Czech Republic is an elegant solution for Go presentations!

Igor Grishin greets the guests of the workshop.

Some videos from this event in Igor Grishin’s blog

Also see the photos of participants’ impressions on Snob site

Просмотров: 2,777
Posted in All posts, Go Game in Russia | Leave a comment

MILDBERRY INSPIRATION hosted Igor Grishin, a public figure, writer, publisher and teacher at Skolkovo Moscow School of Management. Grishin is also the president of Go Federation and the leader of Russian School of Go and Strategy.

Igor explained us how important order is in human life, how easily we can create anything we want with the help of it. Grishin spoke in complicated manner about complicated matters but he did it in a very fascinating and interesting way. But how else can one explain that, for example, a man needs liberty just to lose it or that property and ownership is not the same thing? We spoke about order and disorder, disputed about primacy of these matters and how finally everything would end. And, perhaps, the most important thing that one has to remember – order is important everywhere: in business, in private life and even in car driving.

Dmitriy Shorikov has been studying Go at our school since the last year. He is one of our promising pupils as he progresses really fast.
Now he is going to Canada where he will continue his studies at local school.

I pondered on translating my book into Russian, but now I think it’s not necessary.
Even in English we sold more than 20 copies of the book in Moscow during the first few months after its release.
We would rather take our time for translating and publishing it in Korean. Playing in Russian Championships for the first time in several years, Dinerchtein swept the tournament with a perfect 7-0 score. Ilya Shikshin was the second with 6-1 and will represent Russia in the 2011 World Amateur Go Championships (WAGC); Oleg Mezhov scored third with 5-2 and will play for Russia in the 2011 Korean Prime Minister’s Cup (KPMC).

All the three are the teachers of Insei-League.com. Dinerchtein had to bypass the Championships in recent years as being a pro he couldn’t have a right to represent Russia in international events like the WAGC or KPMC, but since 2010 he can play for Russian team in the European Team Championship. The Russian Championship — held on November 27-28 in St Petersburg — also premiered a new type of live broadcast on KGS with one board each round open for all to watch (see EuroGoTV3 account profile on KGS for game records) and the other — with live comments in Russian by a dan player — to members of the Russian Go Federation or Insei-League.com, or those who paid a $15/year fee. “Many Russian Go fans were very upset because it was not possible to see this (commented) game live,” reports Dinerchtein, who suggested the idea. However, with less than 10% of players attending Russian Go tournaments being members of the Russian Go Federation, Dinerchtein hopes that this special access for members to live games and dan commentaries will help the Federation to increase the number of members. “It’s a very bad situation,” adds Dinerchtein.”Go fans like to watch games of top players free of charge, but they don’t want to support the Federation in any form.” He says he hopes that other countries will also consider this idea as a method of increasing membership.

Russian Go photos won the All About Go Gallery Contest

We congratulate photographer Andrey Gubenko and his artwork:

The winner of another category “Go Art Series” is Corey McQuarters with his works like this:

Special thanks to A. Dinerchtein.

More information about All About Go Gallery Contest