Presentation of Go and Strategy Dep. for the USA investors

Russian school of Go and Strategy takes part in the conference named “Techcrunch Disrupt-2011″ in San-Francisco. This is the main event of the year for the business startup companies working in the sphere of innovation technologies. Investors and the best startups from all over the world came together at this conference. Our school at the conference is represented by its head Igor Grishin.

We have managed to contact with him in the USA and to hear of his impressions after the first day of conference:

“We have placed the tables of Russian school of Go and Strategy with the playing boards and gobangs of different dimensions in the most visited zone of  DISRUPT-2011 exhibition. Afro-american employees of our partner MegaCampus are ready to train playing Go each visitor or potential investor.

During the preparation for DISRUPT-2011 EXPO, MegaCampus team visited the US National Monument Muir Woods. This ancient and dreamy forest of giant trees creates a very deep and powerful impression. Playing Go under these giants is a special feeling not to be compared to anything else. We were literally saturated with striking energy. It went through our spines and disappeared in the sky where the tops of the sequoias and redwoods were pointing.”

Participation in the exhibition is only a part of the program. Igor Grishin plans to visit a number of large USA Universities in order to learn the different aspects of the scientific and educational work there. Moreover he is going to establish a partnership between those Universities and a Go and Strategy Dep. at the Synergy University. 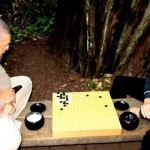 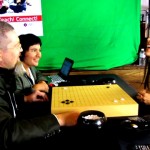 Igor Grishin, the head of Go&Strategy Dep., explains the Go game rules to Heather Harde, CEO of the TechCrunch-2011